"HVAC, or Political Ecology as Facts of Pressure" in Soundscape Vol 15, No 1. Winter 2016. World Forum for Acoustic Ecology

"In the Back of Beyond", a reflection on the difficulty of representing the struggles of small towns and rural backwaters in this period of neoliberal acceleration. In  Global Activism, Art and Conflict in the 21st century. Edited by Peter Weibel. MIT Press. September 2014.

melt with us.  duskin drum and I collaborated on a piece that is inspired by the work of non-humans to make us something else. In the Journal of Aesthetics and Protest online. Print edition coming September 2014.

Postcards of Earth and Mortal Sights. Aether the Journal of Media Geography. Volume 12. 2014

Little Egypt. an essay about the historic and current points of friction between Southern Illinois and the north and the east. In Deep Routes: The Midwest in all Directions. 2012.

Proceedings Process: The State of California v. Lou Gottlieb, in tema, Copenhagen, YNKB, 2009. About reading Gottlieb's God case in Copenhagen. How does Danish law and policy interact differently from in the US, when it comes to making changes? 2009.

Institute of Anarchist Studies: World Class Carelessness. A book review of Mike Davis' Evil Paradises, a collection of essays about spatial injustice at the extremes. 2008.

From South to North. A spread of Lize's map from An Atlas of Radical Cartography with an except of my essay, in Red Pepper Magazine, Feb/March, 2008. Here

I am going to tell you something no one else can tell you who wasn't there... 2007. In the Journal of Aesthetics and Protest.

Tales from the Uni-Nursery One of two articles about Morningstar Ranch. This was published in a book called Failure, edited by Nicole Antebi, Colin Dickey, Robby Herbst.

Our World is Changing; soon yours will too. in An Atlas of Radical Cartography, edited by Alexis Bhagat and Lize Mogel. 2007.

Still  Learning from Las Vegas
Reflections on an aborted project that involved creating the art for a Las Vegas union drive during the penultimate weeks of the "Old Order." The event, involving the installation of 'black clouds over the Guggenheim' was set for the week of September 16, 2001, and never was consummated. And Sheldon Adelson is still a wretchedly bad man who plagues our lives.

Published in the Journal of Aesthetics and Protest, 2001. 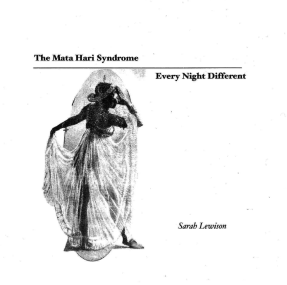 Mata Hari Syndrome: Every Night Different
The MFA thesis. A creative romp about persons and commodities in the early 20th century is online. It was my MFA thesis, accompanying a performative installation about uncertainty that occupied the Marcuse Gallery for 10 days.


Possessive Subject Radical: Whose School is this?


Sarah's work has been featured or mentioned in the following articles: